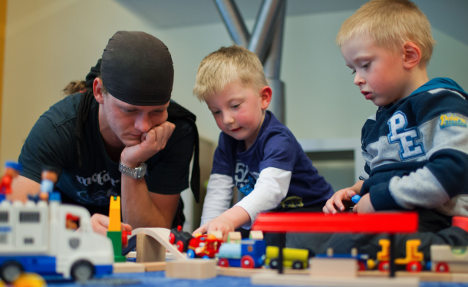 Not one of the men in the story. Photo: DPA

On a small piece of woodland next to the Technido daycare centre in Karlsruhe, a group of boys noisily build a bush camp out of logs. Amid whoops of glee, they start running around, wildly shooting at each other with sticks.

“Karl, Lennie, the rules are keep the sticks down at belly height,” says teacher Todd Phillips calmly as he walks up to the boys. “No sticks near anyone’s eyes.”

“It’s important to have a man here when the warring camps construct their battleground,” Phillips said afterwards, tongue in cheek.

The 47-year-old has been working at the daycare centre looking after children aged between four and six for more than four years.

Phillips, who hails from Florida but has been living in Germany for 15 years, had been working as a graphic designer at an advertising agency. As he became increasingly dissatisfied with his job, he started looking for alternatives and decided that he wanted to work with children.

“They are very spontaneous, open and honest and live in the moment for the most part,” he says. “It just took me a while to realise that suited me more than advertising.”

One of the things he likes most about working with children, he says, is that he can incorporate all his interests into his job. “Music, art, sport – the possibilities are limitless,” he said.

Phillips is a rare find in Germany, where less than three percent of the country’s 360,000 crèche, nursery school and kindergarten teachers are male. It varies according to region – in larger cities like Hamburg and Bremen, more than eight percent of childcare workers are men, while in rural areas in Germany’s conservative south there are virtually none.

The Family Ministry is trying to change this with a €13 million research project called “More Men in Day Care.”

The push for more men in the profession is not just because of the growing realisation that children benefit from spending time with adults of both sexes. It has also been fuelled by a massive shortfall in the number of trained daycare staff – and after next August, all children older than one will have a right to a daycare place.

The law has resulted in new crèches and nursery schools springing up daily – and they are all desperately scrambling for staff.

Although he is in the minority, Phillips says parents are “overwhelmingly positive” about having a man in the kindergarten.

Nursery teacher Thorsten Umfeld agrees. “The parents think it is fantastic. Usually the first thing they say to me is, ‘great, my son finally has someone he can play football with’.”

I’ll always have a job

Nine years ago Umfeld, a musician, stopped touring with various bands to look after his newly-born son. He enjoyed it so much he made childcare his profession and now works full time at a small Catholic kindergarten in Karlsruhe.

“I thought, as a trained kindergarten teacher and a male, I’m always going to have a job,” Umfeld says of his decision.

He is right. Studies have repeatedly shown that men are coveted assets in German kindergartens – everyone from employers to parents can’t get enough of them.

“Unfortunately, I didn’t get a choice though, we had a difficult enough time getting an all-day spot as it was.”

The private daycare operator Pro-Liberis in Karlsruhe runs seven centres in an around the city. It is unusual in that ten percent of their 64 nursery teachers are men. Pro-Liberis managing director Per Giemsch says the men bring a “welcome change” to the team.

‘Even small children notice the difference’

“Even small children perceive them as men; that they are different from women,” he says.

“And then they expect to be able to do male activities with them, such as playing football or some other kind of sport.”

But Giemsch is careful to emphasise that both sexes have to work in all areas – the female staff also saw and hammer in the kindergarten workshop and the men also change nappies.

Fears of sexual abuse by male kindergarten teachers are surprisingly slight. A study conducted last year by the Family Ministry showed that the vast majority of parents completely trust males with their sons and daughters – only five percent were sceptical about men looking after their offspring.

Valeria Henninger’s four-year-old daughter Lily attends a Pro-Liberis daycare centre where two out of the three nursery teachers are male. She has “absolutely no fear” for her daughter’s safety.

“Both of the men are extremely nice and any concerns about them are completely unfounded,” says Henniger.

Low pay cannot be the only factor

While the numbers of men enrolled in kindergarten teacher training is increasing, the rate is still only at around 15 percent. Many cite low pay as the reason – nursery school teachers earn around €2,100 a month before tax and insurance payments.

But there are many other male-dominated professions that earn just as little, such as mechanics, paramedics and butchers.

For Konstantinos Karapanagiotidis, who is the second year of his four-year child care training, “it’s about the children and not about the money”.

As he organises pencils on his desk for art class at the Angeshaus technical college in Karlsruhe, Karapanagiotidis explains that he has always wanted to work with children and that his friends and family fully support his choice.

Karapanagiotidis is lucky. He has already secured a spot for his final-year work placement even though he still has four semesters of study to go. In the daycare world at the moment, it seems it’s definitely beneficial being a man.