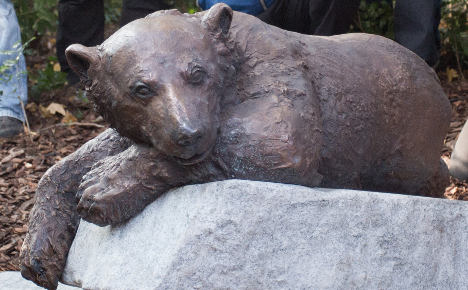 The small sculpture by Nuremberg artist Josef Tabachnyk is entitled “Knut the Dreamer” and shows bear lying on a rock. The sculpture was funded by donations from fans across the world, the Berliner Zeitung newspaper reported on Wednesday.

“Knut will stay in the hearts of many visitors, this memorial will create something for future generations so that the unique nature of this animal celebrity will live on,” said the Friends of the Capital Zoos association.

Knut, who died suddenly on March 19th last year at the age of four, shot to fame after being abandoned by his mother and reared by hand by a zookeeper.

Film footage of Thomas Dörflein feeding the snow-white baby bear with a bottle and then wrestling with him as he became larger – even singing Elvis songs to him – ensured the pair’s enduring popularity. Dörflein himself died in 2008, not long after he broke off contact with the by-then adult bear.

When Knut died three years later, having suffered a seizure and falling into water in his enclosure, distraught fans left flowers, written tributes and photos of him at the zoo, while an online condolence book drew thousands of messages.

The first public appearance of “Cute Knut” attracted 100 camera crews from around the world and the cub generated millions of Euros for Berlin Zoo in lucrative merchandising and additional entrance fees.

The bear is thought to have had more than 11 million visitors from all over the world during his short life, wrote the paper. At the height of his fame, he even appeared on the cover of Vanity Fair magazine and on German postage stamps.

But once Knut grew into a strapping adolescent and then adult, animal welfare groups began to worry that he was displaying abnormal behaviour because of all the attention.

The most popular animal in the history of the Berlin Zoo had left “traces of love” behind, the zoo’s commercial director Gabriele Thöne told the Berliner Zeitung on Wednesday. Some may have disapproved of making the bear into a celebrity, but they too “couldn’t escape the magic of the moment,” she added.