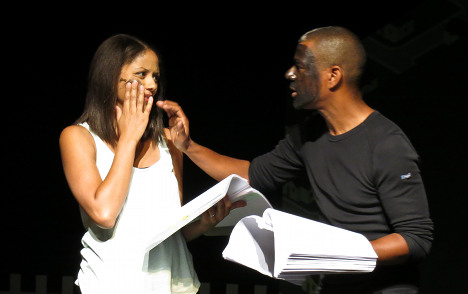 When the Schlosspark theatre cast a white actor as a black man in its production of “I’m not Rappaport” earlier this year, it sparked huge public outcry – particularly when the director defended his decision by saying they could not find a black actor who could speak good enough German.

Shortly afterwards the Deutsches Theater staged “Innocence”, a play by Dea Loher one of Germany’s most reputed modern play-writes. It tells the story of two illegal immigrants from Africa, who were played by white German actors – again in blackface.

The English Theatre in Berlin (ETB) has decided to rework “Innocence” and bring it back to the stage – this time without blackface.

It will be followed by a discussion about the changing face of Germany and the role that race plays in the arts – with the Deutsches Theater director John von Düffel and two of the organisers of the protests against blackface, Julia Lemmle and Sithembile Menck.

‘Black face must only be used for a reason’

Daniel Brunet, who translated and directed the play, told The Local it was just one part of a series that he hoped would “re-open the dialogue about the use of blackface in Germany and to let people air their grievances.”

He said, “If a director is going to use a symbol connected with so much pain and suffering, it needs to be abstract, removed, and for a reason.” In another English Theatre play – Neighbours – a black actor plays a minstrel, a white man who in 19th-century America would dress up as a crudely stereotypical black person and perform and which has since come to personify the racism of the time.

“We showed him putting on, and taking off, his [black] make-up. The character was playing a character in the play,” said Brunet. The black characters in Innocence are to be played by two Afro-German actors, Ernest Hausmann and Moses Leo.

Hausmann, from Hamburg, said he went to see “Innocence” when it was at the Deutsches Theater. “The whole idea of German directors trying to express foreigners is getting boring, it’s ignorant,” he told The Local.

“The English Theatre production will be far more authentic, visually it will be better and moreover it will concentrate on the questions raised by the text – those of guilt and hopelessness,” he said.

The piece tells the stories of a group of seemingly unrelated characters existing at the fringes of society. Other productions in the series, which started in August and so far comprises of four plays, explore issues of immigration and racial identity.

“I imagine the German production (of “Innocence”) had reason for choosing to cast white actors,” said Brunet, a New Yorker, but said he found blackface offensive.

The mix of ethnicities regularly treading the boards at the English Theatre is one of the organisation’s shining points in a largely white theatrical city.

This could come to an end if the city authorities cut the theatre’s funding as planned in 2013, leaving the capital city, and its 150,000 or so English speakers, without a theatre dedicated to offering them accessible productions.

The Berlin government told the ETB the €100,000 grant it uses to pay its rent and staff wages would not be coming in 2013, leaving the theatre in a bind.

“At any one time, there are around 40,000 people in Berlin with an American passport,” said Brunet. “And the ETB takes Berlin’s rich, creative scene and makes it accessible for all of the city’s inhabitants,” he added.

Shutting down arts centre that the director believes has been “at the heart of Berlin ex-pat culture for the past 23 years,” would also threaten the Thikwa theatre run by a mixed disabled and able-bodied team, which operates alongside it.

An educational force in the city

If it were to close, the chances of it re-opening would be slim, said Brunet – he argued it was a lot easier to keep an institution going, no matter how financially troubled, than to start all over again.

Theatre staff have launched a petition which they plan on presenting to Berlin mayor Klaus Wowereit before December. Just because the senate want to cut funding, does not, the petition letter states, “mean that it will close its doors without a whimper.”

Both Hausmann and Brunet hailed the educational benefits of having an English-language theatre in the city. Over the 23 years that it has been open, thousands of German school children from across Berlin and Brandenburg have been coming regularly to watch productions.

“The city needs it, especially for educational reasons,” said father-of-one Hausmann. “Not everyone can afford to go to London if they want to see an English play,” he added.

Innocence starts on October 22. The ETB and The Local have three pairs of tickets to give away to give away for the opening performance. Email The English Theatre Berlin to be in with a chance.