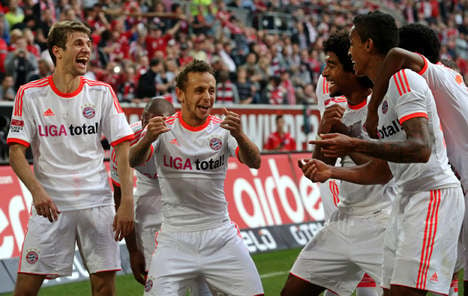 Bayern in 1995, Mainz in 2010 and Kaiserslautern in 2001 had all previously held the joint record of seven successive wins.

It was also the 300th Bundesliga victory for Bayern coach Jupp Heynckes thanks to goals by Croatia’s Mario Mandzukic, Brazil’s Luiz Gustavo and Rafina, plus two from Germany’s Thomas Müller.

“Of course, I am delighted,” said Heynckes. “We played fantastic football from start to finish.”

Müller fired the ball into the box and Brazil midfielder Gustavo enjoyed a simple tap in with Düsseldorf goalkeeper Fabian Giefer at his feet, desperately trying to scramble away the danger.

Müller grabbed Bayern’s third on 55 minutes after a good pass from Ribery.

Fortuna’s defence folded again as Müller grabbed his second on 86 minutes and Rafinha claimed the fifth a minute later.

Schalke doubled their lead two minutes into the second half when an excellent pass from Lewis Holtby on the halfway line put midfielder Marco Höger away.

The 23-year-old sprinted clear of the Dortmund defence and drilled the ball past Borussia’s despairing goalkeeper Roman Weidenfeller.

Having started with a 4-4-2 formation, Borussia then switched back to a 4-2-3-1 attack which paid off when Poland striker Robert Lewandowski headed home on 55 minutes to put the hosts back in the game, but it was not enough.

“We were a bit surprised that Dortmund changed their formation, but we coped well with it,” said Schalke coach Huub Stevens. “After it was 2-1 the whole team fought well and deserved the win.”

Defeat leaves Dortmund 12 points behind Bayern and four behind Schalke.

“After the system change, we were less stable early on. We played too little football and all in all, Schalke deserved the win.”

Bremen claimed only their third win this season as they hammered Mönchengladbach 4-0 to leave Bremen ninth in the table and ‘Gladbach twelfth with just two wins from eight games this season.

Frankfurt enjoyed their sixth win in eight games with a 3-1 win at home to Hannover having scored two goals after only 18 minutes through Algeria midfielder Karim Matmour and defender Sebastian Jung.

Hannover pulled a goal back through Mohammed Abdellaoue on 43 minutes, but Eintracht netted their third on 82 minutes thanks to a header from Alexander Meier.

Freiburg enjoyed a 2-0 win at Wolfsburg to leave the 2009 champions bottom of the table with just one win in eight games, while Bayer Leverkusen move up to fifth after their drew 2-2 at home to Mainz.

On Friday, Hoffenheim drew 3-3 with Greuther Fürth, while on Sunday Nuremberg are home to Augsburg and Stuttgart are at Hamburg.