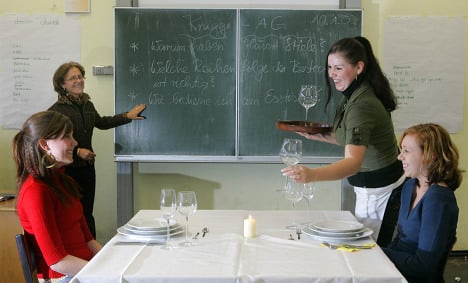 The main concern, Die Welt newspaper reported, was Germany turning into “a society of yobs.”

Chairman Hans-Michael Klein said on Friday that wanted the association to try to “animate Germans into being more polite,” but that this was proving difficult.

Yet he suggested that “etiquette will pulse out over the entire republic,” from town of Grafenau, where the group was meeting.

Spreading the word about good manners was, Klein explained, very important. One of the reasons Germans could be lacking in them was the lax child rearing techniques embraced by parents brought up during the student revolution in the late sixties.

But psychologist Niels van Quaquebeke disagreed with Klein and on Friday took to Deutschlandradio Kultur radio station to talk about manners. Germans had not, he said, lost respect for one another and in fact had become more sensitive.

“As a society, however, we should make time to ask ourselves: how do we want to treat each other,” he added.

Quaquebeke is a professor of leadership at the Hamburg Kühne business university and a well-known expert on respect. He explained that although the way people interacted with one another had changed over the past two decades, trying to be respectful was still difficult.

Particularly tricky was learning to understand others’ logic and being open to other outlooks.

“This is something I too have to work on, to make sure I react appropriately,” said Quaquebeke.

Accepting individuality was one of the biggest challenges Germany faced, he added.