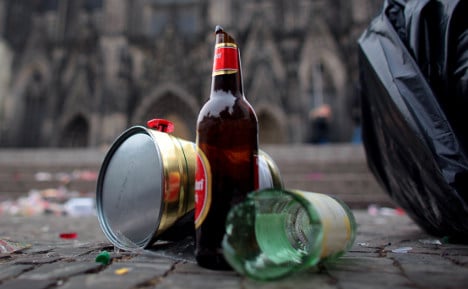 Cornelia Gebhard-Schollwoeck decided to do something about the growing collection of discarded bottles around the glass recycling container in her street in Frankfurt, the Frankfurter Rundschau newspaper reported on Thursday.

The street was partially blocked by road-works, meaning the large glass collection truck had not been able to empty the container for several weeks, the paper said, and people were simply leaving their bottles on the ground.

“I was simply worried that children could hurt themselves,” said Gebhard-Schollwoeck, pointing out that the container was not only outside her house but also next to the entrance to a kindergarten and a playground.

She said she collected dozens of bottles into rubbish sacks and took them in her car to another glass recycling container several hundred metres away. But because she had cut her own hand putting the bottles into the sacks, she did not put them into the container, but left the sacks next to it.

She soon received mail from the local authorities accusing her of illegal rubbish disposal, and despite her explanation of the case, she was hit with a fine for €243.50.

Gebhard-Schollwoeck has appointed a lawyer to fight the fine, saying, “I was helping, and do not want to be punished for that.”

A spokesman for the local authority would not comment on the case as it was ongoing.

Peter Postleb from the city authority’s “Clean Frankfurt” initiative, told the Frankfurter Rundschau he could understand Gebhard-Schollwoeck’s annoyance, but said it was clear she should not have left the bottles by the container.