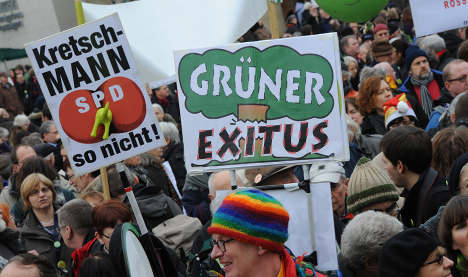 Last week Michael Marquardt, a functionary of junior coalition partners the Free Democratic Party (FDP), was horrified by the loud protests at a public appearance by Chancellor Angela Merkel in Stuttgart last week, the Süddeutsche Zeitung newspaper reported on Wednesday.

A stony faced Chancellor was forced to deliver her speech over the sound of booing and whistling not only due to opposition to the controversial Stuttgart 21 railway development, but also to Merkel’s euro austerity policies, said the paper.

Marquardt was so outraged that he went home and wrote a furious rant on his Facebook page, describing the demonstrators as “old, frustrated women with messy hair” and “unkempt men who smell of old sweat, shouting all over the place with no decency.”

The online retaliation was immediate, with well over 1,000 Facebook users commenting on Marquardt’s statement. The tone soon became heated – one user called him one of the “neoliberal capitalist fascists,” another threatened to shoot all FDP voters.

Marquardt himself told the paper he had received threats, most of which were directed towards his dog. He said he was determined to avoid making similar mistakes in future but has failed to delete the comment from his page.