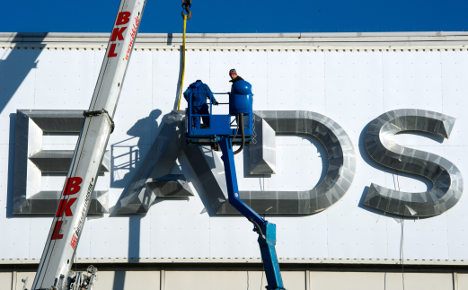 The fiasco was a huge blow to European ambitions because Germany, France and Britain were unable to seal the deal, and the immediate losers are the two companies, analysts and press comment stressed.

German newspapers blamed the government of Angela Merkel in Berlin for shooting the deal down and damaging the EU in a misguided drive to protect German jobs.

EADS is now faced with rethinking its strategy and BAE Systems faces tough options and could be taken over, some analysts said.

But the board of the European Aerospace Defence and Space Company (EADS) reaffirmed its support for chief executive Tom Enders on Thursday.

At BAE, chairman Dick Olver and chief executive Ian King said that despite the setback, the company remained “strong and financially robust” and looked “to the future with confidence.”

Amid recriminations over who was to blame, French President Francois Hollande and German officials said the final decision had been taken by the firms.

But analysts said the companies were left with no choice but abandoning the scheme with only hours left before a deadline under British merger rules.

EADS and BAE Systems were salvaging what they could from the end of their merger strategy, but the collapse of negotiations on Tuesday raised far bigger questions about how EU governments work together.

These were highlighted by excoriating comment in German newspapers which described the failure, widely blamed on Germany, as a “disaster” and a big blow to the “European dream.”

The mass circulation Bild accused the German government of “lacking courage” and damaging the European Union. Germany had “missed an opportunity,” it said.

The business paper Handelsblatt was more direct, referring to “the end of the European dream.”

And Süddeutsche Zeitung declared that Merkel’s ministers “took the wrong road in wanting to control EADS.”

It said: “The defence of German jobs is not determined by a state’s shareholding but by the success of its products and its competitiveness.” The failure of the deal was a “disaster”.

Elections take place next year in Bavaria, where EADS has substantial activities and then Merkel faces national elections. The risk that voters would have seen a merger as a threat to jobs is believed to have weighed heavily with Merkel.

In France by contrast, Hollande is in his first year as president. But he is struggling in the polls against a perception that his administration is weak at home and playing number two to Germany in the eurozone debt crisis.

France is believed to have made a big and untypical concession to Britain by agreeing to limit its shareholding.

Experts in European defence said that abandonment of the attempt to create the biggest aerospace group in the world was mainly a political failure.

But it would not stop consolidation of European defence industries, ever more necessary because of pressure on defence budgets.

‘We could not push on’

“It is not a good sign for Europe’s defence industry because the three countries that really count could not find a way to agree,” said Jean-Pierre Maulny, deputy director of the Institute for Strategic and International Relations in Paris.

At the Carnegie Europe think tank, director Jan Techau said that the merger should have been “a demonstration of the shared ambition” on European defence between France, Germany and Britain, but had shown the opposite.

The director for strategy and marketing at EADS, Marwan Lahoud, said the collapse of the deal opened new possibilities for the group which is based mainly on the Airbus airliner maker.

But BAE Systems issued a cautious statement talking of “modest growth” and confirmed its profit outlook amid “uncertainty” over cuts in defence spending in the United States where the firm does about 45 percent of its business.

Lahoud told Les Echos newspaper: “There is more of a future for a group like EADS,” and failure of the deal should push the company to “reopen the field of possibilities.”

He said that a “formidable opportunity has just been missed” but the group had a clear strategy for diversifying geographically and in terms of industrial activities.

The two firms had been unable to convince Germany of the strategic value of the deal or that Germany’s interest would not be diluted, he revealed.

“In reality, there were never any negotiations with them,” he said. “From the moment that the (German) government said no, we could not push on.”

Some analysts had warned that Germany feared being sidelined, with the heart of airliner maker Airbus being settled firmly in Toulouse, southern France and the hub of the defence activities going to London where BAE Systems is based.