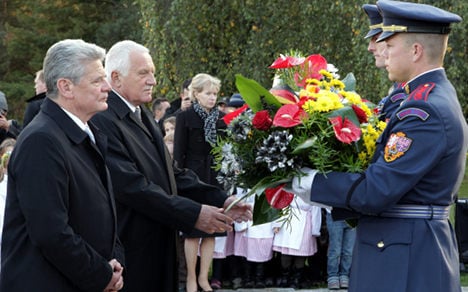 “I would like to pay my respects to the victims by visiting Lidice,” a village 20 kilometres northwest of Prague, said Gauck – the first German head of state to visit the site since the lethal raid by Nazi commandos on June 10, 1942.

“There was a great wrongdoing, a great failure, and we carry a great responsibility,” Gauck told reporters earlier, following talks in Prague with his Czech counterpart Vaclav Klaus.

“It’s very important to speak about this bloody and terrifying past … (and) to pass our knowledge to future generations,” Gauck said.

The former pastor in communist East Germany was paying his first visit to the neighbouring Czech Republic since he took office in March.

“We should show respect and mourning to those affected so much by former generations of Germans,” said Gauck.

“We have been waiting for this apology for 70 years,” Marie Supikova, a survivor of the massacre who was born in Lidice in 1932, told a public Czech broadcaster.

The massacre was part of a retaliatory sweep that saw 15,000 people detained, killed or taken to a concentration camp after the assassination of senior Nazi official Reinhard Heydrich in a bomb attack by a Czech paratrooper trained in Britain.

In Lidice, the Nazis executed all men, sent the women to a concentration camp and local children to Germany for re-education, or to gas chambers.

On June 24, 1942, the Nazis also killed more than 30 people in the village of Lezaky about 100 kilometres east of Prague.

Now both members of the EU, neighbours Germany and the Czech Republic are focused on healing wounds dating back to World War II including Nazi massacres of Czech civilians and Prague’s retaliatory post-war expulsion of ethnic Germans from the borderland regions of then Czechoslovakia.

In a move towards reconciliation last month, Czechs laid to rest the bodies of 12 German farmers killed by vengeful Czechs after World War II near the central city of Jihlava. They had previously been in a mass grave.