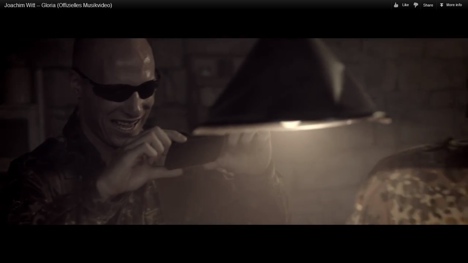 The video for the song “Gloria” purports to show an “apocalyptic horror scenario in grand and challenging images,” the 63-year-old Witt said on his Facebook page.

One scene shows a group of soldiers in Bundeswehr combat uniforms, with their military insignia visible, holding down a woman on a table while one of them rapes her. One soldier is filming it on a smartphone.

Scenes later in the video show that a young girl who witnessed the event has been shot.

The Bundeswehr Association accused Witt of defaming German soldiers. “Those who have been putting their lives on the line for this country are being classed with brutal violent criminals,” said association head Ulrich Kirsch in a statement on the association’s website.

He called on people to voice protests on Witt’s Facebook page. “He wants open dialogue,” he said. “Then he should get it.”

Germany’s parliamentary defence commissioner Hellmut Königshaus also condemned the video. He told Berlin’s B.Z. newspaper, “Many soldiers have already complained to me about the video.” He added that its makers should have “turned their brains on before releasing a video with such scenes.”

“I apologise if someone feels attacked or insulted because of the insignia represented in the videos, as some people clearly do,” Witt responded on his Facebook page. “The video is clearly a work of art! The soldiers in the video are interchangeable!”

“As a former member of the federal border control (during the Cold War), I respect the work of the Bundeswehr,” he added.