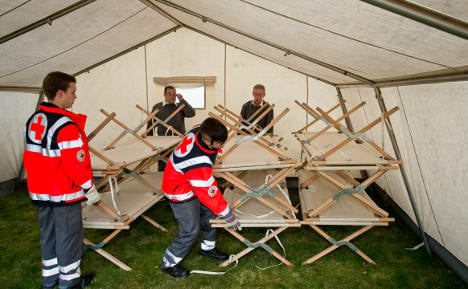 “We aim to replace the tents with mobile accommodation units before the winter,” Robert Dirrigl, head of the camp in question told The Local.

He said there had been a sharp increase in the number of refugees arriving from Serbia and Macedonia and this had left the Central Reception Centre in Zirndorf near Nuremberg in Bavaria, hopelessly overcrowded.

Refugees who have been given a pass are able to come to the centre to for meals and to sleep, said Dirrigl – but there is no longer enough room and all attempts to find more capacity elsewhere have failed.

They will now be offered space in the tents. Six have been set up each with enough room for 14 people as well as wooden floors, heating and lighting.

“The last time we used tents was in 1992. It is a shame but there is nothing else we can do, it is an emergency solution to an emergency situation,” said Dirrigl.

A member of the regional Red Cross, which was contracted to put up the tents, said there was no information about how long it would be before they could be taken down again.

”It should be a temporary measure,” he said. “It would be good to take them down as soon as possible.”

Both he and Dirrigl seemed unhappy using the word ‘container’ to describe what is planned to replace the tents.

“The mobile housing units are set to be set up as soon as possible,” said Dirrigl, who only after some prompting admitted he was talking about containers.

He said all efforts would be made to make sure that children did not have to sleep in the tents.

“It has been extremely difficult to find other places for them to stay. We are doing our best, but the situation with the property market makes it difficult. We are always trying to figure out other options.”

Ruth Kronau-Neef, spokeswoman for the Mittelfranken regional government told The Local that the number of refugees had risen sharply over the last four weeks, with around 15 percent of those arriving in Germany taken on by Bavaria. There are two main reception facilities for them – in Zirndorf and in Munich.

Between September 17 and 27, she said 405 new people were taken on at Zirndorf – more than twice as many as in the last few months, which was high anyway.

Zirndorf has capacity for 500 people, but as of September there were 675 people there, she said.

The plan is to quickly increase capacity in the car park area in front of the garage – initially for a year – to house around 150 people.

Temperatures in the area are expected to drop to around five degrees Celsius at night over the next two weeks.