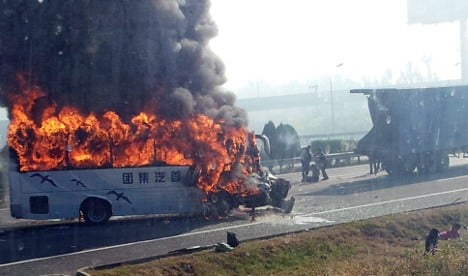 The official Xinhua news agency cited police in the port city of Tianjin, southeast of Beijing, as saying the accident occurred on an expressway linking the capital with the commercial hub of Shanghai.

The Chinese bus driver was also among the dead in the accident and three other passengers are in a critical condition in hospital.

“Most have burns, breaks, or contusions,” said a doctor treating the victims at a hospital in Tianjin. They have been provided with a translator.

Officials from the embassy were said to be at the scene of the accident and in nearby hospitals to collect more information and offer support.

The accident happened on China’s National Day holiday and as the country’s roads are full of travellers returning to their home-towns during a week-long series of holidays known as Golden Week.

China National Radio posted a photograph on its website showing the burned-out remains of what it said was the bus involved in the accident. Eye witnesses said they saw people running from the blaze.