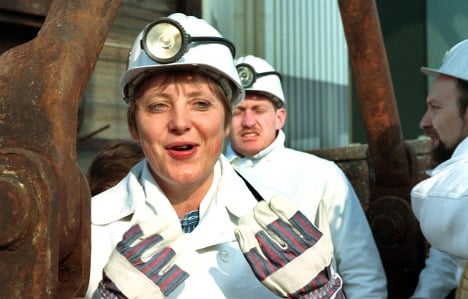 She spoke to an investigative parliamentary committee on Thursday after claims were made that she had hampered the search for alternatives to the former salt mine in eastern Lower Saxony. She was environment minister from 1994-1998 under Chancellor Helmut Kohl.

“There was no robust evidence that would have pointed to a non-suitability of Gorleben,” Merkel told the committee, Der Spiegel magazine reported.

Merkel also dismissed accusations from the opposition that the government had neglected to undertake thorough inspections in order to save money.

Merkel claimed then-Chancellor Helmut Kohl had not made the decision to use Gorleben lightly.

“Neither did I,” she stressed, stating they had acted on the basis of the exploration concept of 1979.

Gorleben was chosen as a site in the late 1970s. Many say the decision was based largely upon economic and political, rather than safety, criteria. The former salt mine was intended as a temporary holding site, and the government soon began investigating whether to make it permanent, Der Spiegel reported. It became the source of decades of squabbling between politicians, activists, and scientists.

Merkel maintained Thursday that there was “no indication” that the location was unsuitable for the permanent storage of radioactive waste.

A parliamentary committee was created in 2010 to investigate Gorleben, and has since evaluated thousands of documents from the last three decades, Der Spiegel reported. So far, little has come of their work, but calling Merkel in for questioning is considered their crowning achievement thus far.

Merkel did a dramatic about-face last year on her own energy policy, when she agreed to close down all of Germany’s remaining nuclear power facilities by the end of 2022. The decision came on the heels of the nuclear disaster in Fukushima, Japan, triggered by an earthquake and a tsunami.