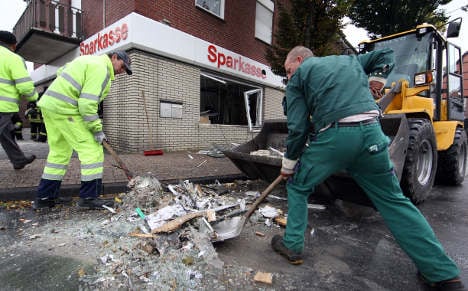 Parts of the Sparkasse bank were flung more than 80 metres across the street, damaging two neighbouring buildings, the Westfälische Allgemeine Zeitung reported on Monday.

Despite their misjudgement, the suspects appeared to have left the scene with the cash machine as police confirmed to The Local, it was missing.

The suspects probably used far too much dynamite, police in Nottuln, near Münster North-Rhine Westphalia said on Monday.

No information has been released on how much money was in the machine, but the blast has caused hundreds of thousands of euros in damage.

The flats above the bank are uninhabitable a police spokesman said, and engineers will be brought in to determine whether the entire building will have to be demolished.