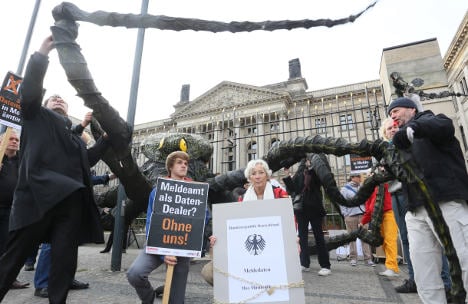 Protesters outside the lower house of parliament on Friday. Photo: DPA

The Bundesrat on Friday put a stop to the controversial law, allowing local authorities to sell data, which was passed in less than a minute by the lower house back in June.

The vote happened while many MPs – and the rest of the country – were away watching Germany’s Euro 2012 football match against Italy.

Consequently, barely two dozen MPs took part in the vote, which was held without a debate. There was a widespread media outrage when a video of the parliamentary session was released on Youtube a few days later.

The law sparked the ire of privacy advocates because it included a passage that allowed local registration offices that collate data on citizens to sell contact information to companies for advertising purposes, without the express consent of the citizens.

“That was really not the finest hour in Germany parliamentary history,“ said Kurt Beck, state premier of Rhineland-Palatinate, on Friday.

Germany’s 16 states have long agreed that registration authorities should only be allowed to pass along the data if citizens gave their express consent.

A parliamentary mediation committee will now set to work making the necessary changes to the bill, said Die Welt .

They will also have to decide who will be tasked with asking citizens’ permission and determining whether infractions to the law will be penalized with a fine, as well as whether firms can use the data purchased more than once.