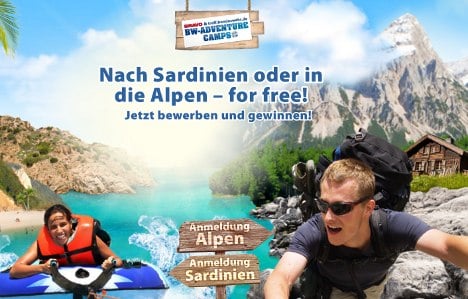 „Action, Adrenaline, Adventure! The challenge of your life is waiting! Army Adventure Camps 2012″ – that’s the slogan the German army is using in a video on the You Tube channel of Bravo, Germany’s most popular youth magazine.

The video offers ‘free’ trips to the beaches of Sardinia or the mountains of Berchtesgaden, where the adventure camps are held.

Over on Bravo‘s website, the recruitment campaign continues. A slim young girl wearing a rucksack proclaims “outdoor fashion is in,” above an article detailing what readers might want to wear at the free Army Adventure Camp being held at the ‘beach or in the mountains.”

Visitors to the site can also read about ‘Michael and his mule’ – an interview with a soldier who has the “really cool” job of caring for pack mules, or check out photos of teen heartthrob actor Liam Hemsworth doing skateboarding tricks before reading about the crazy sports they themselves can try at the adventure camps.

After the end to mandatory military service last year, the Germany army has been put in the difficult spot of having to convince young people to sign up voluntarily. But critics object to the adverts in Bravo, which is aimed at 12 to 19-year-olds.

Ralf Willinger, a children’s rights consultant at Terre des Hommes Germany charity, told the taz newspaper it was wrong for the Army to advertise on the Bravo website.

“The armed forces should be limited to recruiting adults, so that they do not attract young people who are easily influenced and can hardly appreciate what an obligation military service and the related foreign missions can entail,” said Willinger.

The adverts on the Bravo website make no mention of the risks of military service, despite the fact that Germany currently has troops deployed in Afghanistan.

But a spokeswoman for Bauer Media Group, which publishes Bravo, told the taz she did not see any problem with the adverts.

“The army is a part of our democratic society – why shouldn’t they be allowed to advertise in Bravo?” Katrin Hienzsch asked, adding that the army was “an interesting employer that offers training in diverse career fields.”