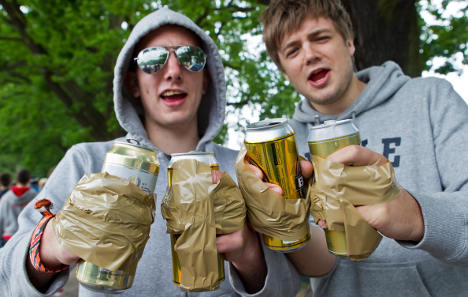 Just over 15 percent of German kids between 12 and 17 years old told researchers for the federal health promotion authority (BZgA) that they drank at least five alcoholic drinks once a month or more.

This is “shockingly high,” said Elisabeth Pott, the BZgA director. The figures were released to try to determine how effective a government campaign to limit excessive teen drinking had been.

The campaign, “Alcohol? Know your limit,” was launched three years ago in an attempt to encourage sensible drinking. A year before the campaign started, the share of teenagers who said they drank five alcoholic drinks or more once a month or more, was 20.4 percent. It was even higher in 2004 at 22.6 percent.

Health Minister Daniel Bahr said alcohol was the most widespread addictive substance in Germany, adding that 26,000 teenagers between 16 and 20 had been treated in hospital for acute alcohol poisoning in 2010.

Young men provided significant cause for concern, with around 20 percent aged between 12 and 17 saying they had drunk more than five drinks in one night during the previous month – and more than 50 percent of those between 18 and 25. Their rate of risky drinking was twice that of young women of the same age.