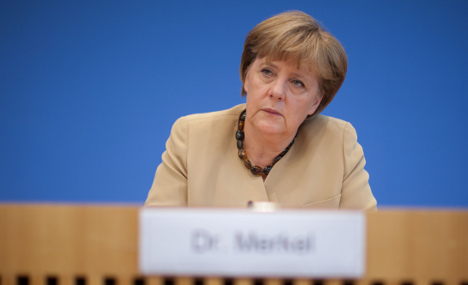 Merkel told a news conference on her domestic and foreign policy that she was aware of the ire directed at her over the euro turmoil, with protesters in ailing countries shouting her name and newspapers likening her to Hitler.

But she insisted that although Germany had an outsized role to play as Europe’s biggest economy, crisis-fighting was a collaborative effort among leaders who had the single currency’s best interest at heart.

“In my travels I have often been asked how do you deal with negative feelings because some people think that I am more responsible than others for decisions we’ve made together,” she said.

“In Greece, some people tend to forget that I didn’t think up these programmes but rather that they’re all from the ECB, the European Commission and the IMF (International Monetary Fund),” she said, referring to the troika of international creditors.

“I didn’t invent them, I couldn’t just think up such economic programmes even if I wanted to,” she said.

“So I always say, I’m not doing this to annoy anyone but because I’m strongly convinced that Europe can only maintain its prosperity and see its interests realised if it overcomes its crisis in such a way that it is better able to compete and solve our debt problems.”

Merkel added of her fellow European leaders: “We work very well together and try to find good solutions together,” she said, highlighting in particular the Franco-German axis of cooperation.

She acknowledged that the road to recovery was arduous and renewed an expression of sympathy for the Greek people over the biting reforms required to pull them out of the debt quicksand.

But she said she believed that cutting spending and restructuring economies to improve competitiveness were the sole way to restore confidence in the eurozone.