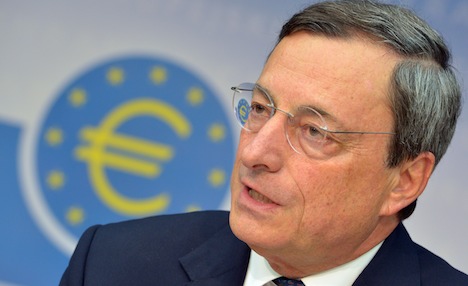 crisis strategy for driving down borrowing costs for struggling eurozone

members, it failed to convince many in Germany, Europe’s effective paymaster.

“A Black Day for the Euro”, “Over the Red Line” and “Pandora’s Box Opened

Forever” read some press headlines about the bond-buying programme, in a

country historically fearful that such intervention could fuel inflation.

eurozone states, compared to 13 percent in favour, according to a poll

published on Friday, but conducted by Infratest dimap before Draghi’s announcement.

Finance Minister Wolfgang Schäuble insisted in Stockholm Friday that the programme was not monetary financing of sovereign debt, and bashed the German media as “very nervous” in its criticism of Thursday’s ECB decision.

Chancellor Angela Merkel implicitly backed the action, but would only say just minutes after it was unveiled on Thursday that the Frankfurt-based central bank was acting “within its independence and within its mandate”, a message her spokesman later repeated to reporters.

On Friday however, Merkel welcomed conditions attached to the new bond-buying programme, saying governments also had work to do.

“The ECB made clear yesterday … that the future of the euro will, to a large extent, be determined by political action, and that the conditionality is a very important aspect,” Merkel said after talks with her Austrian counterpart Werner Faymann.

“Responsibility and checks, or help and checks and conditions, always go hand in hand,” she told reporters in Vienna.

“That is the way we have always chosen and so I believe we have the political duty to solve politically the difficulties that we have together. And the ECB is playing its role with its particular responsibilities.”

But hard on the heels of a weeks-long assault against the plan by the head of the German central bank, or Bundesbank, newspapers of different political stripes accused the ECB of making a move from which no good could come.

“Saving the euro at all costs can economically be a disaster. That is one red line which may not be crossed. The other limit is the law…,” wrote Friday’s centre-left Süddeutsche Zeitung newspaper.

“A euro commmunity based on one treaty breach after another is on shaky ground,” it added.

The Handelsblatt business daily pondered why Merkel, who is now in the countdown to new elections which must be held by October 2013, had failed to

clearly come out for or against the ECB plan.

“One way to read it is the chancellor does also have misgivings about the buying of sovereign bonds of crisis countries, but no longer feels in a position to stop the phalanx of supporters of the Draghi model,” the paper said online.

Or, Merkel did support the ECB action but could not openly enthuse about it because of domestic political pressure from euro-sceptic members of her centre-right coalition, the paper added.

Werner Weidenfeld, of the Centre for Applied Political Research at Munich’s Ludwig Maximilian University, said Merkel had to be mindful of voter sensitivity to money-related issues.

But he said that if she did oppose the ECB plan, Merkel would also not want to be a lone critical voice.

“In politics, people hate to be alone, and if she openly opposed the announcement, she would be completely isolated in the eurozone. And no politician wants that,” he said.

But she may also support the action, which has certain provisions attached meaning targeted countries also have to submit to budgetary discipline conditions under one of the eurozone bailout funds, which Merkel actually wants, he commented.

Opponents of more intervention in stemming the near three-year eurozone crisis may be pinning their hopes now on a September 12 decision by Germany’s constitutional court on two key crisis-fighting tools.