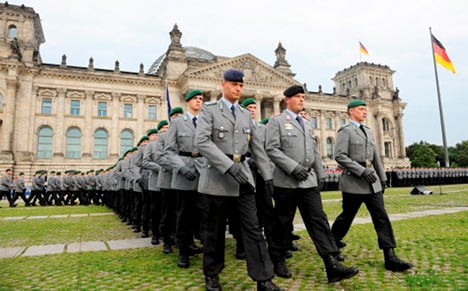 The structural reforms, spearheaded by Defence Minister Thomas de Maizière, are part of a plan to reduce the German army to 170,000 full and part-time employees by 2017.

But around 90 percent said the changes would have to be reversed soon, and would not last, while around 75 percent said they were poorly or very poorly involved in the reforms.

Of the more than 1,700 soldiers asked by the Chemnitz Technical University on behalf of the soldiers’ association (Bundeswehrverband), just 27 percent said they thought the reforms were bad or very bad.

Over 75 percent of the 1,700 leaders asked said they felt they were not involved enough in the changes that have already been made – something de Maizière’s spokesman said the ministry would work to improve when implementing future changes.

“It was to be expected and understandable that military structural reforms have created a feeling of security among soldiers, employees and their families.”

Upcoming stages of the reforms, and how they can be better introduced, are to be discussed at the German army conference at the end of October.