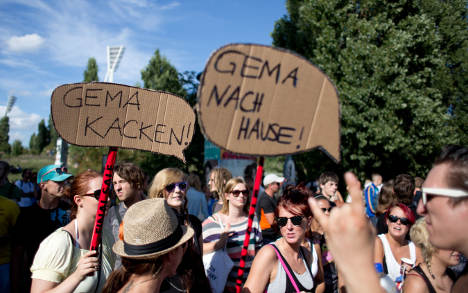 Demonstrations have been organized outside GEMA’s offices in several major cities, including Berlin, Frankfurt, Munich, Stuttgart, Nuremberg, Leipzig and Dresden.

Organizers, including the Clubcommission network of Berlin nightclubs, say that GEMA’s new tariffs, set to take effect on April 1, 2013, require a payment of 10 percent of a club’s income – calculated by a co-efficient of the entrance fee and the area of the club.

By the Clubcommission’s calculations, that means a small club of 120 square metres with an entrance fee of €6, currently paying GEMA €45 per event, will have to pay €270 per event by the new system. This, it says, is a crippling hike likely to force several clubs to close.

Opponents also have a fundamental complaint against the royalty organization. It says GEMA’s pay-out structure disadvantages club DJs and composers of electronic dance music, because most royalties are paid out on recorded music.

As result, protesters say the system is skewed in favour of major artists.

“At the moment 65 percent of GEMA payments go to five percent of its members,” said a Clubcommission statement made last week. “In 2010, GEMA spent about €127 million on its own administration with more than 1,000 employees, which is collecting money like a state authority.”

In response to the demonstrations, GEMA apparently sent an email to its members, regretting that “because of the constitutionally guaranteed right to assembly,” it wasn’t able to prevent the protest taking place, even though “the organizers are working with false and polemic accusations.”

GEMA claims that 60 percent of events will get cheaper, and hikes will effect only 3,000 clubs across the country, which it said was a “minority.”