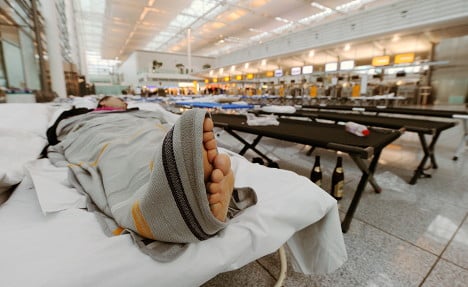 More than 20 flights to and from Berlin, Frankfurt and Munich were cancelled on Wednesday due to knock-on effects of the Tuesday strike, while travel chaos is set to spread later in the week.

The UFO labour union, which called for the past two cabin-crew strikes, said on Tuesday that it was planning much longer industrial action for the coming Friday – affecting flights to and from at least six airports including Frankfurt, Berlin, Munich, Stuttgart, Düsseldorf and Hamburg.

UFO leader Nicoley Baublies warned that the strike would be extended to every German airport during a 24-hour strike on Friday if an agreement was not reached.

“We are very serious, that means that on Friday there will be a 24-hour strike at every German airport,” he said.

A press spokeswoman from Frankfurt airport told The Local that it had camp beds ready for stranded passengers, “if it was needed.” In Munich, rows of beds have already been set up alongside the check-in desks and were slept in by 350 people on Tuesday night.

Lufthansa had shown “no sign of bending”, Dirk Vogelsang, who is leading the negotiations, said, adding that “at the moment, it looks very, very difficult” with the attitude hardening on both sides.

If management continued what he termed “sabre-rattling”, the union would consider “blanket strikes,” he said.

Previous strikes have lasted six hours, but had a knock-on effect throughout the day and even into the next. The upcoming action should last 24 hours and could see over a hundred thousand passengers stuck in airports across Germany.

Lufthansa cabin-crew staff are fighting for a five percent pay rise and so far have expressed disappointment with discussions. A spokesman said on Tuesday that “the door is wide open” for talks to recommence and that industrial action would only end with a compromise.

The announcement comes after Baublies said on Tuesday he and the cabin crews were ready to extend the strike further should Lufthansa continue their “zero communication” tactic with the union.

The pay increase offer of 3.5 percent was not enough, he said, particularly as it had to be calculated against a 20 percent pay cut. UFO has called for a five percent pay increase and a halt to the practice of using temporary workers.

A Lufthansa spokesman said the firm was sorry passengers were caught up in the conflict and that it had no understanding for the piecemeal way in which information about the strikes was being issued.