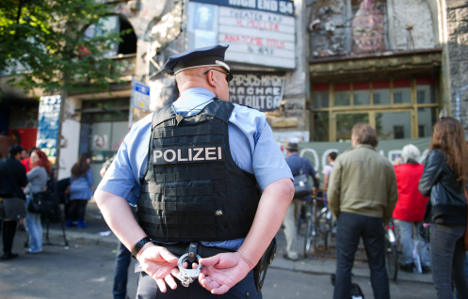 Martin Reiter, head of the Tacheles organisers, called the eviction from the graffiti covered building on Friedrichstrasse in Berlin’s Mitte district “art theft”. The building has attracted tourists and party-goers as well as art-lovers for decades.

Reiter told The Local, “I feel really sad and angry. The mayor of Berlin should resign immediately. Berlin has lost a really famous landmark today.”

He said the group would move to the Neukölln district.

“The spine of the organisers and artists will remain intact and we will accept an offer of asylum at the Cube Club… It is very important that the whole group can stay together and retain the Tacheles ethos and climate,” Reiter said.

A symbol of the city’s once-vibrant alternative scene, Kunsthaus Tacheles (Art House Tacheles) has long been a must-see for tourists visiting the German capital.

Built in 1909 as a shopping mall, the structure was later used by the firm AEG, the Nazi Party and the Free German Trade Union Federation.

In February 1990, shortly after German reunification, artists moved into the crumbling building, which was in severe disrepair and slated for demolition.

They installed galleries and performance spaces into its maze-like passageways, along with a cinema, a nightclub and a café.

In 1998, the building was bought by a subsidiary of the Fundus group, which worked out a ten year rental agreement with residents for the symbolic sum of one Deutschmark, and then 50 euro cents per month.

In 2008, the lease ran out. The Fundus group declared bankruptcy, and its creditor HSH Nordbank assumed ownership of the building. After years of legal wrangling between the bank and the resident artists, a court in Berlin ruled that the bank could forcibly evict them.

Politicians have said the building would continue to be used for cultural purposes. But Martin Reiter, head of the Tacheles organisers, wasn’t very optimistic.

“…they may try to keep it open as a culture house, and visitors will have to pay to get in and perhaps they will get to buy something too. We will be making art somewhere else.”