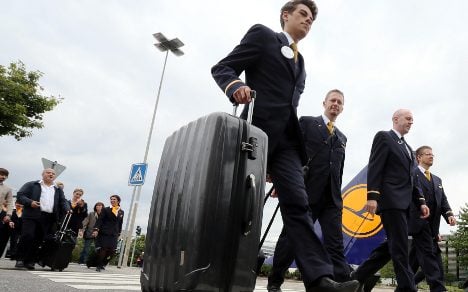 Planes at Frankfurt airport, Europe’s third busiest, “were not in the right place and cabin crew unavilable” after the strike ended on Friday, the spokesman said, adding that a return to normal air traffic was expected by later in the day.

Luftansa confirmed in a statement posted online that 18 flights had been cancelled.

Friday’s strike had forced the airline to ground 190 of 360 flights, mostly short and medium-haul flights to Germany and the rest of Europe.

The union had called the eight-hour strike in its fight for a five percent pay increase for cabin crew for 15 months backdated to January this year after three years of zero increases.

Unions had held off from strike action while last-ditch wage negotiations were still under way, but with no breakthrough, UFO declared the talks had failed and called for immediate walkouts.

Lufthansa, whose latest offer was for a pay increase of around 3.5 percent, has urged unions to return to the negotiating table.

UFO says it will not rule out further strike action.