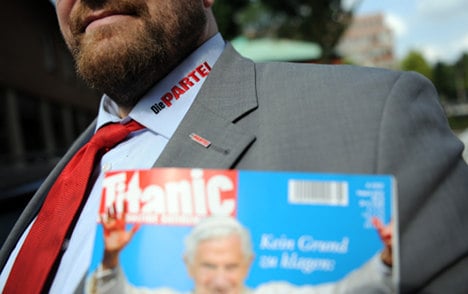 Staff from the Titanic magazine said they planned to hand out copies of the controversial July edition in front of the Hamburg court on Friday. “If the demand is there, we will also print further copies,” said editor Leo Fischer.

“After extensive advice, the See of Rome has decided to withdraw its request for an injunction against Titanic Verlag,” the German Bishops’ Conference said in a statement on Thursday.

Both parties were due to appear in Hamburg’s regional court on Friday for Titanic to appeal the injunction which, although it did not require copies to be pulped, stopped more being published.

The Vatican argued the cover was an infringement of the Pope’s personal rights and was illegal and took the magazine to court.

The front cover carried a photograph of the Pope with a large yellow stain on the front of his cassock and the headline, “Hallelujah in the Vatican – the leak has been found!”

The back cover has a photo of him from behind with a large brown stain and the headline, “Another leak is found!”

The leaked documents shed light on many Vatican secrets, including the Church’s tax problems, paedophile priest scandals and negotiations with hard-line traditionalist rebels.