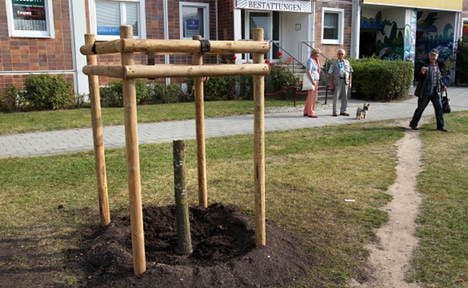 The oak tree, which was planted on Sunday in a ceremony with German President Joachim Gauck, was found sawn down by a passerby early Wednesday morning, Der Spiegel magazine reported.

The extreme left-wing group Antifaschistischer Fuchsschwanz claimed responsibility, saying that planting a tree in memory of the three day siege on the city’s central hostel housing asylum seekers and refugees – was a “slap in the face” for those terrorised in 1992.

The tree was, the group said, a symbol of “hyper-German identity and militarism,” in a press release published by alternative left-wing news service Indymedia.

A baying mob of hundreds of xenophobes surrounded the building in the Lichtenhagen area, known as the “Sunflower House” in August 1992, pelting it with rocks and Molotov cocktails while applauded by local residents and largely tolerated by police.

Even once riot police had cleared off most of the rioters, and the refugees were taken to safety, neo-Nazis returned and set fire to a neighbouring hostel housing around 150 Vietnamese workers.

Town councillor for social affairs Liane Melzer said on Wednesday that the tree being chopped down signalled that “the recovery process is far from over.”

She added that the council were going to be “planting a new peace oak.”

Although known to the police, Antifaschistischer Fuchsschwanz (anti-fascist fox-tail) have never been known to take action before, a spokeswoman told Der Spiegel.

“Planting the peace oak was supposed to be a central point of remembering the attacks, 20 years on,” added a spokesman for Rostock city. He added that there had been criticism of the event online, but no concrete threats had been received.