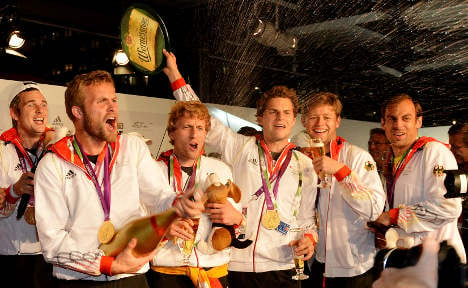 The squad held a party on the German cruise ship “MS Deutschland” after their August 11 victory over the Netherlands which secured their second consecutive Olympic gold medal.

Photos have been released in the German media of players dousing each other in champagne and smoking cigars on the ship – which the cruise ship owners claim resulted in a long list of damages.

The company says holes were burned in the teak panelling of the casino, a broken pane of glass, and numerous stains from spilled drinks. But the most expensive aspect of the repairs will be docking the ship.

“The carpets and upholstery cannot be replaced while the ship is in use,” Deilmann shipping company spokeswoman Kornelia Kneissl told Bild newspaper. Every day on land costs the shipping company €75,000, she said.

The matter appeared to be settled on Monday after the players apologized for the damage and the captain gave the owners a signed hockey stick.

But Bild reported on Tuesday that Deilmann had also sent the hockey team a bill for €500,000 in damages.

The German Hockey Association (DHV) said it had not yet received a bill.

But it remains unclear whether the association can be held legally responsible for the actions of its members.

One lawyer told Bild that liability had to be resolved individually in each case of damage.

“It’s simple. Whoever destroys a table must pay for it,” said Burkhard Benecken.

“But I doubt that in this case the liability for any physical damage can be assigned individually. That would have to have been assessed on site. Even the organizers are not automatically liable for the damage. You would have to prove the organization was at fault.”

If the shipping company pursues its claim, the matter is likely to end up in court.