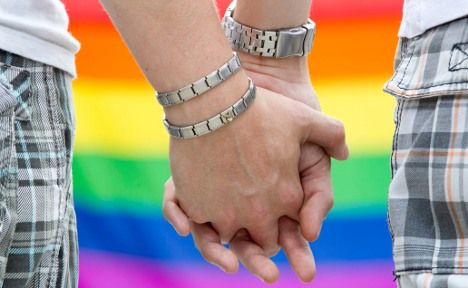 “I believe that it would be good at this point to wait for the court’s decision,” Merkel said, referring to a ruling due soon from Germany’s constitutional court on whether tax privileges given to married couples should also be extended to gay couples in registered domestic partnerships.

Speaking to public broadcaster ARD on Sunday evening, Merkel said her coalition had done a great deal to improve the legal standing of same-sex partners.

“But whether that must result in the same tax status as married couples, I’m not sure myself,” she said.

Germany’s constitutional court is expected to issue a decision next year.

Merkel’s coalition government is split over the idea of giving same-sex partners the same tax privileges as married couples. The idea of extending adoption rights to gay couples has also caused arguments within the coalition.

While junior coalition partners the Free Democrats (FDP) are in favour of full equality on both issues, many members of Chancellor Angela Merkel’s conservatives are far less enthusiastic.

The tax issue has supporters and opponents within Merkel’s Christian Democratic Union (CDU) and its Bavarian sister party the Christian Social Union (CSU). But the idea of gay adoption rights remains deeply unpopular among members of the conservative union.

The German tax system allows married couples to practice “splitting”, meaning that husbands and wives pay their income tax on a joint basis, resulting in huge advantages where there is a big difference between their two salaries.

This arrangement does not apply to gay and lesbian couples, who have registered domestic partnerships. Germany does not recognize gay marriage.

Last week Katherina Reiche, state secretary in the environment ministry for the CDU, sparked outrage with her comments on extending tax privileges to gay couples. She said Germany’s future lay “in the hands of families, not in same-sex partnerships.”

And she added that in her opinion, what she called “this demographic development” was “next to the euro crisis, the biggest threat to German prosperity.”

Critics accused her of homophobia and narrow-mindedness.