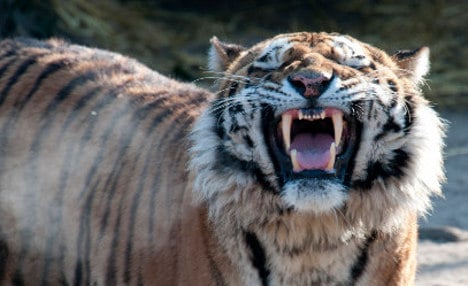 Theo Pegel has been criticised for not trying to tranquillise the animal after the attack on Saturday. “This is the darkest day of my life,” Pagel told reporters afterwards.

But he was defended by a colleague.

“One had to assume after the attack that the zoo keeper was still alive,” Frankfurt Zoo director Manfred Niekisch said on HR radio on Monday. “Our colleagues in Cologne had no other choice.”

Tranquillizing the tiger would have taken up to 15 minutes, he said– possibly crucial time to reach the woman who was bleeding badly.

The police agreed that the zoo director was within his rights, adding that the police service pistols would not have been much use against a tiger.

“Our guns would not have even scratched it,” he said.

The city public prosecutor is investigating the 43-year-old woman’s death after, a spokesman confirmed to The Local on Monday.

“The autopsy will take place today, but we won’t have the results right away. We expect the investigation to last several weeks,” said Daniel Vollmert. He said an investigation was standard following a workplace death.

The zoo keeper, named in the German media as Ruth K. apparently failed to close a safety door while entering the tiger enclosure to clean it, and was attacked by a male Siberian tiger called ‘Altai.’

A co-worker found Ruth K. unconscious and badly bleeding, while Altai was gone, according the Bild newspaper.

The zoo was evacuated as police moved in, using a helicopter to ensure they could maintain an overview of what was happening.

The tiger had by this time got into an administrative building – where a window was open through which he could have got out.

The director of the Cologne Zoo, Theo Pegel, shot and killed the tiger with a high calibre rifle through a skylight in the roof of the building.

Zoo officials were at a loss to explain what happened to Ruth K., a section head with many years of experience dealing with big cats.

“We cannot currently explain how such an experienced keeper could make such a fatal mistake,” said Pegel, adding that she should not have been inside the cage with the big cat.

The tragic attack has prompted some animal rights organizations to call for a nationwide check on zoo security systems while others say the incident shows that it is impossible to keep such animals captive in a suitable manner.