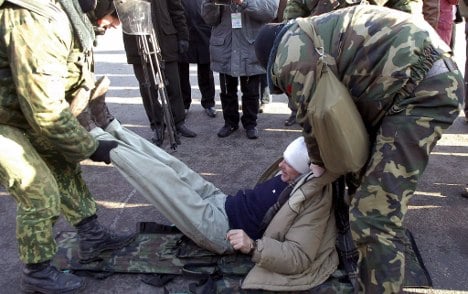 At least 100 members of the Belarusian security forces, including the country’s feared militia, took part in training programmes in Germany from 2008 to 2011, the Tagesspiegel newspaper reported on Thursday.

On top of that, nearly 400 border guards, senior militia officers and technicians were trained by German officers in Minsk.

A spokesman for the Interior Ministry confirmed the story on Friday.

It also emerged that in November 2010, Belarusian security forces were allowed to observe the German police in action, as they protected a nuclear transport train from demonstrators as it was travelling across Germany.

This was one of the biggest ever German police operations in history, with some 20,000 officers in the field at various points along the route. Some 500 people were injured, mostly by teargas, as the protests were cleared. Police used some 2,190 cartridges of pepper spray, the paper reported. Water cannons were also used.

The purpose of the training was to teach “the Belarusian militia EU standards, using the example of the German police,” an Interior Ministry statement said. One of the main lessons being taught was how to police major sporting events, the statement continued. Belarus is set to host the Ice Hockey World Cup in 2014, which Germany hosted in 2010.

But only a few weeks after watching the nuclear transport operation, Belarusian security officers brutally put down demonstrations against alleged election fraud in the country, which is ruled by an authoritarian government under President Alexander Lukashenko.

“I am very worried by reports that have emerged from Minsk since last night,” German Foreign Minister Guido Westerwelle said in a statement in December 2010. “It is unacceptable for opposition candidates and their supporters who want to practice their right to freedom of expression to be bullied, beaten or arrested.”

Westerwelle was also involved in a controversy with Lukashenko in March this year, when the Belarusian president said in an interview, “I thought to myself: better to be a dictator than gay,” after the openly gay minister again condemned his regime.