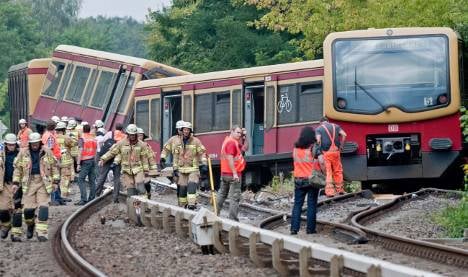 “We are very happy that there are only six people injured,” he said.

Around 150 emergency workers raced to the spot in northern Berlin where the S25 suburban train had come off the tracks. Two carriages were completely off the rails at the accident site between the Tegel and Schulzendorf stations.

Around 50 people were in the train at the time of the accident, which happened just before midday. Those who were hurt had mostly suffered bruising as their carriage fell sideways and they were thrown around inside.

The train was yesterday left where it came to a halt while engineers tried to work out what had caused the accident.

The S-Bahn, operated by Deutsche Bahn, has been plagued with problems over the last few years, such as repeated breakdowns in the winter and a shortage of drivers. A third of the system is being put up to private tender in a bid to reduce the public subsidy and improve service.