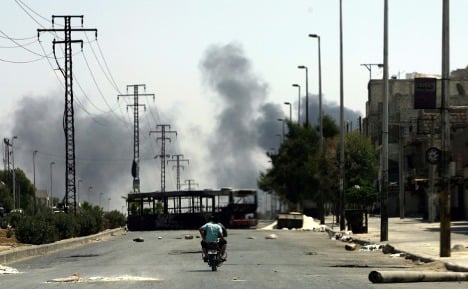 The streets of Aleppo. Photo: DPA

“When Assad falls we will not be standing there with empty hands,” said Ferhard Ahma, an exiled Syrian working on the project dubbed “The Day After.”

Ahma has been in Germany since 1996 and his involvement in the opposition movement has seen him on the Syrian wanted list since 2010, Die Welt newspaper reported.

He is apparently involved in negotiations between Syrian opposition figures over how to deal with the security services, how to start the process of national reconciliation, and where to start in developing a new constitution.

These negotiations have been taking place at the German Institute for International and Security Affairs (SWP), but have been kept secret for the past six months, the paper said.

The group was also supported by the United States Institute of Peace, and has been given logistical support by the German Foreign Ministry and the US State Department.

“Reconciliation will not be a simple process, chaos should be expected after Assad,” said Ahma. “But the experiences of other Arabic countries give us hope that we can do it in Syria too.”

He said it was important to start planning for the time after Assad now, rather than waiting for him to fall. “If we fail than the country will fall apart. But if we succeed, Syria will be a good example for the whole region,” said Ahma.

The 37-year-old said he and his colleagues in Berlin were keen to ensure that all Syrian ethnicities, religions, and political strands, as well as men and women were represented at the talks, which he described as a “the whole of Syria.”

The results will be published on August 28 in the name of the opposition Syrian National Council.

“Syria is a country in which no active politics has been allowed for 50 years,” said Ahma. “Politics was practically extinct in society.”

German prosecutors charged a man employed at the Syrian embassy in Berlin with spying at the end of July, after arresting two men in February at the same time as expelling four members of the diplomatic corps.

It was also reported this weekend that German intelligence agents are operating off the Syrian coast, feeding information on the regime’s troop movements to opposition forces.

“We can be proud of the significant contribution we are making to the fall of the Assad regime,” a BND official told the newspaper.

Germany does not back foreign military intervention in Syria. But earlier this month Defence Minister Thomas de Maiziere said Germany could help to solve the crisis by providing humanitarian aid and logistical support.