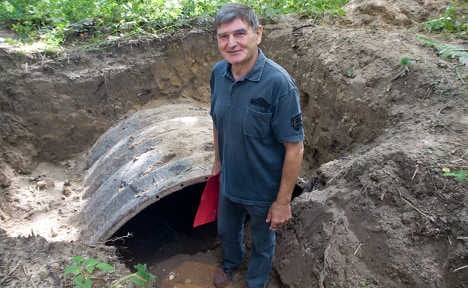 Werner Sobolewski’s afternoon stroll in the northern countryside a few weeks ago was interrupted when he came across a wide section of corrugated metal pipe poking out of the ground.

The curve of steel stirred a distant memory for the 62-year-old who had worked at an East German army base in the Mecklenburg Western-Pomerania area. He remembered young recruits running through the tunnel during training, but he had a feeling there was more to it than that.

He was right – the two-metre diameter tube had once been part of a tunnel built by western intelligence agencies from their part of Berlin to directly under the East Berlin telephone exchange used by the Soviets.

The biggest phone tapping operation of its era

Dubbed Operation Gold by the American and British agents operating it, the 450 metre-long tunnel was stuffed with tapping equipment, and was said to have enabled spies to listen in to 440,000 phone calls in the year they used it.

It was like “a cross between a military submarine and a central post office,” Operation Gold expert Bernd von Kostka told The Local.

Around 300 US and British intelligence personnel were employed at a secret centre in West Berlin, listening into the calls made via the post office – just a metre above the end of the tunnel.

Yet all that effort was wasted, said Kostka. “There was no real gold nugget of information, more mosaics that made the fragile picture of the GDR system more complete,” he said.

This was probably thanks to MI6 traitor George Blake, who had told the KGB all about the tunnel before it was even finished. He had approached the Soviets while in Korea, and signed up to work as a double agent while posted around Europe by MI6.

The KGB allowed the spying tunnel to be built and operated for a year in order to protect Blake – but ensured that nothing particularly sensitive was discussed from that telephone exchange. They did not even tell the East German authorities, said Kostka.

“It was likely that the very important things were not spoken about over the phone, so as not to risk giving any information to the West,” he said.

Yet when the Soviets decided in 1956 to close the operation down, they made a huge deal out of it, expressing outrage that such spying was being conducted within Berlin, which was still not formally divided.

In the months that followed its discovery, the East German government invited around 50,000 citizens to visit the tunnel and see Western deceit first hand.

“People were given the day off work, special buses were provided; it really was an event” said Koska, who has written a book about Operation Gold.

“West Germans officials were just as surprised as the Easterners were when news about the tunnel broke,” Kostka explained, adding that no locals were involved in the project at all.

The accusing Soviet finger was pointed firmly at the Americans, he said – as Soviet leader Nikita Khrushchev was keen to keep the British out of it for a while.

“He was on a state visit to Britain and allegedly did not want to strain tensions while in the country,” said Kostka.

Although the Americans had funded, it, the British agents had supplied the technology needed to bug the phone lines.

Until now, historians believed that most of tunnel dug up from under the eastern side of the city had been lost. The quality of the steel was top notch and so there was a good chance it had been melted down or reused, said Kostka.

‘This way we can tell the whole story’

Two sections from the western end are on display in the city’s Allied Museum in Berlin, where Kostka works.

So when Sobolewski rang Kostka to say he had seen the pieces of tunnel in the museum and believed that they matched the bit he found, he had to see it for himself and on Wednesday confirmed that the first bit of the “lost” spy tunnel had been found.

“I think that we may get the third piece, as we have the others,” said Kostka, who said he was lucky enough to see the two other pieces being lifted from the ground in 1997 and 2005.

“This way, we get to tell the whole story, not just parts of it.”

As historians now know that at least parts of the tunnel were chopped up and taken all over the region, Kostka thinks that others could being to pop up across eastern Germany.

The tapping equipment remains nowhere to be found. Kostka suggested it may have been taken to Russia and used by the KGB themselves – but what they could have heard with it remains a mystery.