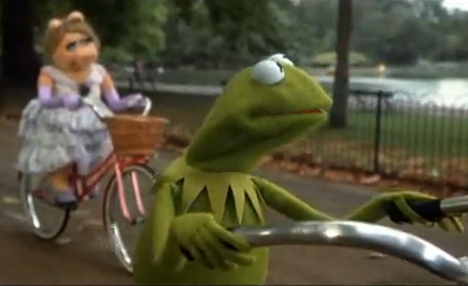 The man calling himself “Herr Schröder” entered a specialist electric bike shop in Cologne at the end of May, and told 46-year-old shopkeeper Claudia Liebe that he was the German voice of the world’s most famous frog.

Just like Kermit, he proved to be adept with the ladies. “He seemed totally serious, and very charming,” Liebe told the Kölner Stadt-Anzeiger newspaper.

“Herr Schröder” said he spent his free time organizing bike tours for the blind and now had some donations that he wanted to invest – specifically, €13,000 for two tandems and a motorised tricycle.

The trickster said the purchase would be filmed by a camera team for his employer, state broadcaster WDR, the next day.

Liebe, who had herself worked with disabled people previously, leapt at the chance to promote her shop for a good cause and agreed.

Then, as the “Voice of Kermit” left to go the bank to get a deposit, he stopped casually in front of one of the shop’s prize products – a “Kölle-Bike,” decorated with the city’s coat-of-arms, worth €2,500.

“He really loved the bike,” said Liebe. “And I was so naïve that I offered to let him ride it to the bank.”

Inevitably, she never saw him again. She did get her bike back though. “Schröder” later sold the bike for a “donation” of €200 to a horse riding school in a different area of Cologne.

Police said they believe “Herr Schröder” was a 57-year-old con-artist they have been seeking for some time. Their suspect has been connected with at least half a dozen cases of fraud.

WDR spokeswoman Annette Metzinger also told the paper, “It does happen that someone falsely claims to be a WDR employee,” and added such cases were taken seriously and prosecuted.

Kermit the Frog could not be reached for comment.