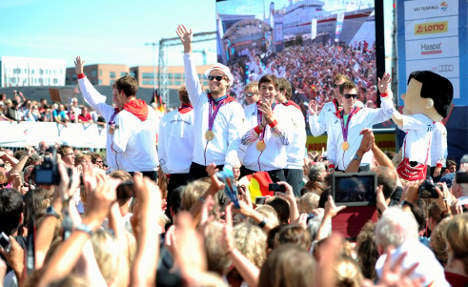 Onlookers began gathering in the early hours at the Hamburg harbour to greet the ship, the Hamburger Morgenpost newspaper reported. Many held banners with personal messages of congratulation while others went out on smaller boats to accompany the cruise ship on its approach to the harbour.

The athletes, as well as a number of their friends and families, had been on board for 36 hours and arrived back to a hero’s welcome from 10,000 people in the harbour and another 10,000 who lined the banks of the river in blazing sunshine.

Click for pictures of the MS Deutschland arriving in Hamburg

The athletes were ferried from the cruise ship into the centre of the city on small boats, reaching the City Hall where Hamburg’s mayor Olaf Scholz greeted them, calling them “our heroes”.

“It was an incredible atmosphere onboard, and what we saw in the harbour was crazy,” Olympic hockey medallist and Hamburg local Moritz Fürste told the paper, before breaking in a rousing rendition of Hamburg, meine Perle – a popular football song.

The boat trip home was, head of the German Olympic Sports Confederation Michael Vesper told the paper, “a reward for the athletes” – 25 of whom onboard were medal winners.

Germany finished the Games with 44 medals, sixth in the national medal table.