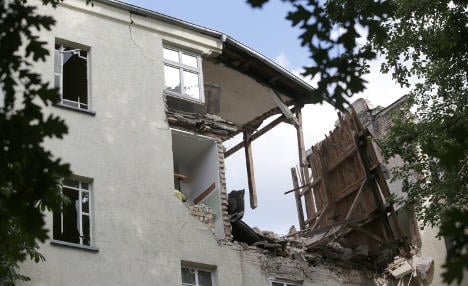 Windows were sent flying from their frames as the explosion destroyed two apartments on the third and fourth floor of the residential building in the Lichtenberg district of the capital, the Bild newspaper reported on Monday.

The ear-splitting noise was reportedly heard throughout the neighbourhood.

Rescue workers discovered the building’s handyman, a tenant in the third floor apartment, in the rubble, seriously injured but conscious and able to speak. “Luckily we found him quickly,” fire brigade spokesman Stephan Fleischer told the newspaper.

Locals reportedly have a nickname for the lucky survivor: “Willy the Gasman.” “He always repaired everything for us when there were problems,” said neighbour Anja Wendtland.

The rest of the building was quickly evacuated, and sniffer dogs have been brought in to make sure no other people are trapped in the building, though the other apartment was empty.

The exact cause of the explosion remains unclear, but there have apparently long been problems with the gas heating system, the newspaper said. A police investigation has been launched.