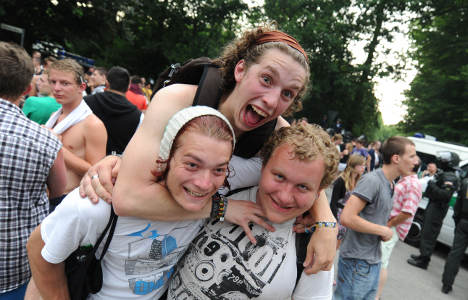 The ministers also think the social networks should be made more liable for other illegal activities that are facilitated by their platforms – such as slander, cyber-bullying, and incitement to violence, Bild newspaper reported on Friday.

“A commercial internet platform that makes something like this possible also carries a large measure of responsibility,” Reinhold Gall, interior minister of the southern German state of Baden-Württemberg, told the Südwest Presse newspaper.

“Facebook does not meet its responsibilities to protect its users, if the only difference between an invitation to friends and the whole world is just one mouse-click,” Bavarian Interior Minister Joachim Herrmann chimed in. “Facebook has a duty to protect its users and the public with appropriate warnings and preventative measures.”

Gall stressed that internet users would not be let off the hook. “If, despite a ban, such parties take place anyway, and they are accompanied by vandalism, breaches of the peace, and ignoring dismissals, we will not limit any responsibility,” he said. “Crimes and public order offences will be prosecuted hard.”

Some mass parties have resulted from mistakes when hosts did not realise their invitations had reached the entire network, rather than just their friends. Others have seemed deliberate. A recent example was a party organised on a Lake Constance beach by 20-year-old Matthias Lohr, where 1,500 people accepted his public invitation.

Police got wind of the event and, fearing chaos, persuaded local authorities to ban it, but more than 150 people still showed up. It was classified as an illegal party, and Lohr ended up facing a fine of €227,000.

Rainer Wendt, chairman of the German Police Union (DPolG) told Bild: “If you invite people to a Facebook party that sparks a police intervention, you will have to pay the costs.

“But politicians should create the legal basis for making Facebook share the costs. The firm has made the platform available, and can’t pretend it has nothing to do with it.”