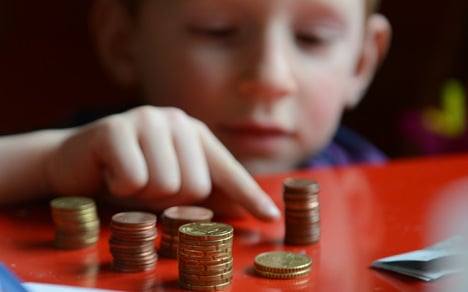 Parents with children aged between six and 13 now give their offspring, on average, €27.18 per month to spend at will, a children’s consumer survey uncovered.

The results were published in daily paper Bild on Tuesday, revealing that not only had pocket money averages climbed considerably since 2011 – but the little extras children cash in on, such as on birthdays or holidays, had also risen.

Youngsters between nine and 13 were getting 6.6 percent more a year in birthday and holiday money, bringing the average amount up to €220, the comic and young people’s publishing house Egmont Ehapa found.

The figures differed between age groups. Generally younger children got less money and nearly 60 percent of parents even said they gave their four and five-year-olds monthly spends – the average amount being €14.26.

Ten to 13-year-olds cashed in the big bucks, getting an average of around €34 a month, while six- to nine-year-olds pocketed around €18.78, according to the survey.

What children tended to spend their money was not unusual – the main purchase for the nine to 13 age bracket were sweets, which took up 63 percent of the monthly budget.

Some were a little wiser with their cash – 27 percent said they would choose more long-lasting items to buy, like toys and games. A further 19 percent put their pocket money towards buying collectable stickers and 15 percent chose to spend money on the cinema.

And as a generation born technologically savvy, 13 percent said that they put their pocket money towards their mobile phone bill.