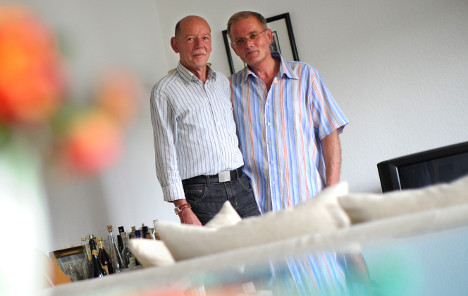 Schröder came out in support of a proposal by 13 CDU MPs calling for tax equality between marriage and homosexual partnerships, the Süddeutsche Zeitung reported on Tuesday.

In a joint statement, the conservative parliamentarians said, “It is not acceptable that politicians are constantly … being asked to abolish the current inequality by the Constitutional Court.”

The proposal comes in reaction to a Constitutional Court verdict from last week, which decided that public officials, judges, and soldiers in registered partnerships – whether gay or heterosexual – should have the same custody rights as married couples, and so should also be entitled to family allowance.

The 13 MPs therefore called on their own party to “finally” to make tax equality “its own political decision.”

“We want to recognize that life partners with a registered partnership have set up a framework for a long-term relationship based on mutual trust and affection,” the statement said. They said registered partners had the same “mutual income obligations and duties to each other” as married couples, so they should have the same tax status.

The MPs intend to put their proposal to the CDU parliamentary faction after the Bundestag’s summer interval. Schröder supported the proposal, telling the newspaper that it had come at the right time, “because in lesbian and gay life partnerships, people take on long-term responsibility for each other, and so they live by conservative values.”

Up until now, the CDU has opposed tax equality between marriages and homosexual partnerships, though the Free Democratic Party, the junior party in the government coalition, has long been a proponent.