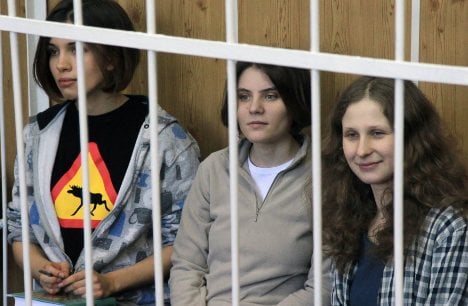 Academy President Klaus Staeck said on Thursday that what he called the overreaction of the Russian state and the Orthodox Church had placed them “outside the standards of European cultural traditions.”

Three members of the feminist punk rock collective were arrested in March on charges of hooliganism following a February performance at a Russian Orthodox Church in Moscow that included a song appealing to the Virgin Mary to “chase Putin out.”

They face up to seven years imprisonment, which Staeck said was disproportionate.

Germany’s Human Rights Commissioner Markus Löning has called for the women’s release, and Amnesty International has declared the band members ‘prisoners of conscience’ due to the severity of the Russian state’s response.

The letter said that “dissent is a right in any democracy,” and was published as Russian President Vladimir Putin visited London to meet the British Prime Minister David Cameron and watch a judo competition.

German supporters have held benefit concerts in Berlin and Hamburg recently raising some €2,000 for the band’s defence.