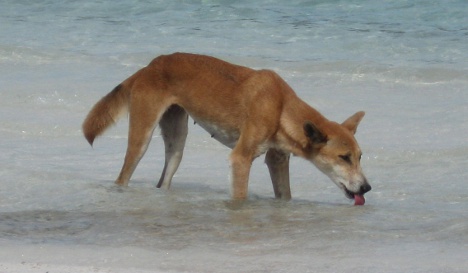 The 23-year-old was attacked by the wild dog after straying from a campsite on Fraser Island, popular with tourists, early on Saturday and falling asleep at a nearby walking track, national parks officials said.

He was airlifted to hospital with serious wounds to his head, arms and legs, said regional parks manager Ross Belcher.

“This incident serves as an ongoing reminder that dingoes are wild animals and need to be treated as such,” said Belcher.

Fraser Island, off the Queensland coast, is known for its dingo population and a nine-year-old boy was killed by by one of the dogs there in 2001.

There have been several non-fatal attacks on the island. Last year a three-year-old girl and a South Korean woman were bitten in separate incidents.

A teenager had her sleeping bag shredded by a dingo as she was sleeping at a lodge in tropical Kakadu earlier this month, just weeks after a landmark ruling that baby Azaria Chamberlain was snatched in 1980 by one of the wild dogs.

Chamberlain’s mother spent three years in jail convicted of her murder, but was released in 1986 when some of her daughter’s clothing was recovered by chance near a dingo lair.

She fought for decades to clear her name in a sensational case which spawned a Meryl Streep film.