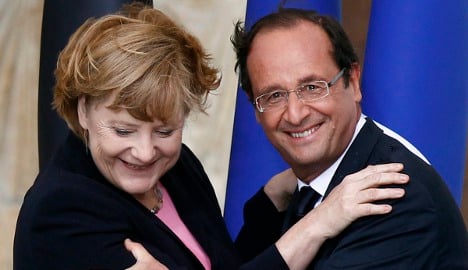 “Germany and France are deeply committed to the integrity of the eurozone. They are committed to do everything to protect the eurozone,” the two leaders said a joint declaration released in Berlin.

“In order to achieve this, the (eurozone) member states and European institutions, must live up to their respective responsibilities. Both countries stress the necessity to implement quickly the conclusions of the European Council” in late June.

Aides to Hollande said earlier that the leaders of the two biggest eurozone countries would have a telephone conversation around midday Friday on the economic crisis in Spain.

The talks were to focus on the economic reforms proposed at last month’s summit of European Union leaders to resolve the eurozone debt crisis and in particular how they apply to Spain, the aides said.

Hollande said Wednesday he wanted a “rapid and firm implementation” of the reforms agreed at the summit, adding that EU leaders needed to match the speed with which markets were reacting to the eurozone’s economic woes.

The accord last month paved the way for the eurozone’s future €500 billion bailout fund to recapitalise ailing banks directly, without adding to the national debts of struggling countries.

Spanish borrowing costs have soared above seven percent this week – the level at which Ireland, Portugal and Greece were forced into bailouts – and official figures released Friday showed its unemployment rate rose in the second quarter to 24.63 percent.