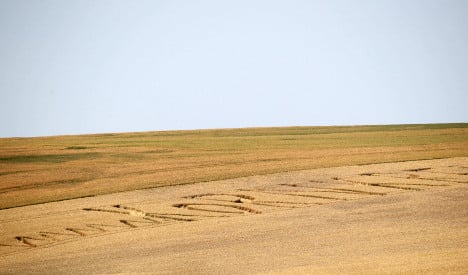 The 300-metre long address, which is more than 20 metres wide, appeared in the field near Göttingen, just two weeks before the wheat was due to be harvested.

The damage will probably cost the farmer around €1,500, Die Welt newspaper reported on Thursday.

But the owner of the website – which is dedicated to crop circle research – is also angry at what happened.

Andreas Müller said he had nothing to do with it. “I fully distance myself from this act, which can be described as nothing short of vandalism,” he wrote in a statement posted on his website.

He suggested the “crop website” was an act of revenge by people whose crop circles he had revealed to be the work of humans rather than aliens.

“I very much regret that the incident has taken place and don’t consider it an advert [for my website].”

He said both he and the farmer concerned were considering legal action against whoever it was who put the website into the field.

Police said there was no extraterrestrial involvement in this case – unless aliens were using a roller of the kind often found in ordinary back gardens.