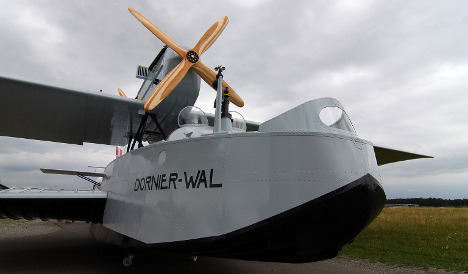 Nicknamed “the whale” for its belly-shaped fuselage, the Dornier Do J, was a sturdy, all-metal seaplane which helped open up new routes for air travel in the 1920s and 30s. More than 300 were built before the war, but only one original still exists.

The one which made it back from Amundsen’s 1925 North Pole mission was a prized specimen, displayed in the Deutsche Museum in Munich, but was destroyed in a fire during World War II.

The one surviving original is in the Luján transport museum, Argentina. Now the Dornier Museum in Friedrichshafen in southern Germany has the next best thing – a faithful replica of Amundsen’s life-saver.

The Norwegian explorer had long crossed off the South Pole from his “to do” list when he started planning the trip to the North Pole.

Just as his choice of dogs rather than ponies had sealed the 1911 race to the South Pole against Robert Scott’s team, the success of Amundsen’s mission to the North Pole was dependent on having the right kit.

Check out the plane, in bits and completed, here.

After a couple of failed attempts, he chose Dornier’s “whale planes” and had two shipped, in parts, to Spitsbergen in Norway, where in spite of the the already sub-zero temperatures, the teams screwed the Wal N24 and Wal N25 together.

The team of six men included American Lincoln Ellsworth who had partly financed the trip, and German Dornier engineer Karl Feucht. Despite both planes being over-loaded by 500 kilos each, they lifted into the air on May 21 and headed north.

Eight hours into the journey the engine of Wal N25 cut out and the crew had to make an emergency landing on the ice. Shortly afterwards, Wal N24 also had to land, with such force that it was irreparably damaged.

The men were stuck on the ice, in two planes a kilometre apart – only one of which looked like it would fly again. They were 250 kilometres from the North Pole, and a lot further away from civilisation.

The situation was desperate, and Amundsen immediately cut his men’s rations – from the planned kilo of food a day, to just 300g. They were eating a mixture of dried meat and fat, as well as chocolate and biscuits.

Because Amundsen had concentrated on filling the planes with scientific instruments rather than equipment to deal with snow or ice, the men were left with two wooden shovels, two dagger-type knives and an axe.

They worked in shifts, sleeping in the plane when not sharing the motley collection of tools to clear enough snow to create a rudimentary runway. By the time Amundsen decided they had enough space to take off, he estimated they had cleared around 500 tonnes of ice and snow.

On June 14, after more than three weeks in the ice, they abandoned most of their equipment so the surviving plane – Wal N25 – could carry all six men, and took off, heading home.

By this time they had been given up for dead, and despite not having made it to the pole, were welcomed back in Norway as heroes.

The adventures of the Wal N25 did not finish there – Wolfgang von Gronau bought it in 1927 and kitted it out with new BMW engines to cross the Atlantic in 1930 – the first time the route had been undertaken from east to west.

This week, two years of research and building, including a trip to see the last original specimen in Argentina, come to fruition, with the unveiling of the Wal N25 replica. Sadly it will not fly – modern safety rules would prevent it, the Dornier Museum says. But it looks ready to take to the skies.

Karl Bircsak is technical director of the International Aviation Museum Foundation in Hungary. He led the replica building project, which he said largely relied on historical photographs and plans as well as measurements of the surviving original in Argentina.