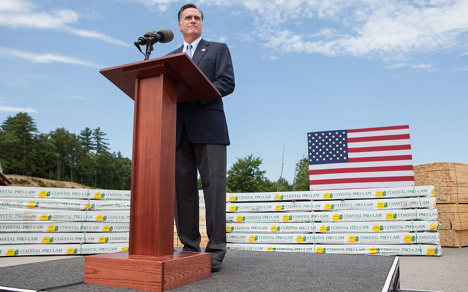 Starting on Thursday, Romney’s visit to Europe was going to include Berlin for a one-on-one meeting with Chancellor Angela Merkel. But that was before he found out that she would be on holiday and unavailable to meet up, the Tagesspiegel newspaper said on Sunday.

Merkel is not going to be far away though – she is due in Bayreuth, Bavaria, on Wednesday for the opening of the Wagner opera festival. This traditionally marks the start of her summer holiday.

The paper said Romney’s foreign policy advisers had recommended against him following in President Barack Obama’s footsteps and undertaking a large European tour with public appearances.

They are allegedly keen to avoid his trip being unfavourably compared to Obama’s wildly successful 2008 European tour, during which he gave a rousing speech in front of Berlin’s Victory Column to more than 200,000 people.

Instead, Romney will visit the United Kingdom, Israel and Poland and skip EU heavy-weights Germany and France altogether – despite the fact he lived in Paris while on a Mormon mission for over two years.

Romney’s campaign team told the Tagesspiegel that he would instead meet Merkel at some point before the U.S. elections on November 6.

German businesses typically favour Republican American politics, the Süddeutsche Zeitung reported on Monday. In the run-up to the 2012 election pharmaceutical conglomerate Bayer is leading the way after donating $261,000 to the election campaign.

It is widely accepted that big businesses offer generous donations on the run up to elections in the hope newly elected governments will keep them in mind while setting policies, the paper said.

And while the Republican party is traditionally the main recipient of German politican donations, the 2008 elections saw Obama’s Democrat election campaign receiving more than his opposition.