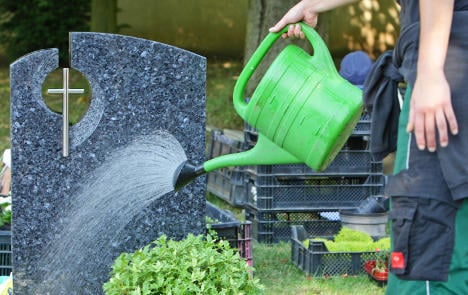 Claudia Schmitt, 48, buried her mother just three weeks ago and had intended to take her 82-year-old father Heinz with her to the grave on Tuesday.

“He is no longer so good on his feet but wanted, as always, to visit mother at the cemetery once in the week,” she told the Express newspaper.

“But because of the rain he decided to stay at home.”

This was a stroke of luck in what was otherwise a horrifying day for Schmitt. “He could certainly not have taken the shock,” she said.

It was when she bent down to check the flowers and tidy up the grave, that she saw something she initially assumed was a coconut.

“There were also many worms and maggots. And then when I saw a jawbone complete with teeth, I flipped out. Of course one had the terrible feeling that one had found the remains of one’s own mother. “

Weeping with fear, she phoned her brother Harald who said, “I couldn’t understand what was going on. Claudi was beside herself. I just understood West Cemetery and went there straight away.”

When the siblings called the cemetery administrators, staff were terribly sorry.

“Things like this can happen, but we can only apologise. The remains will be buried tomorrow in a separate funeral,” said a spokesman.

Schmitt said visits to her mother’s grave would be even more difficult in the future.

“I light a candle for mother every day at her grave. I’m not sure whether I’ll have the courage to go tomorrow,” she said.