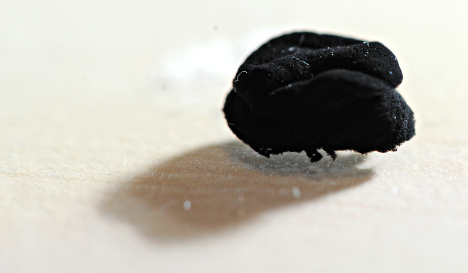 The jet-black, carbon-based material is causing a stir in scientific circles across the world, wrote Die Welt newspaper on Tuesday.

“Our work is causing great discussions in the scientific community. Aerographite weights four times less than world-record-holder up to now,” co-author Matthias Mecklenburg, a PhD student at the Hamburg University of Technology told the paper.

Weighing just 0.2 milligrams per cubic centimetre, Aerographite is also water repellent, conducts electricity and, unlike many other light materials, is able to withstand high pressures.

“It is able to be compressed up to 95 percent and be pulled back to its original form without any damage,” Professor Rainer Adelung of Kiel University told the paper.

“Up to a certain point the Aerographite will become even more solid and therefore stronger than before,” he added.

The new material consists of a network of porous carbon tubes that is interwoven at nano and micro level, explained scientists from Christian-Albrechts University in Kiel and the Hamburg-Harburg University in a paper in the “Advanced Materials” scientific journal published on July 10.

“The lightest material in the world until now – a nickel-based material that was presented to the public about six months ago – is also constructed of tiny tubes. But nickel has a higher atomic mass than carbon. Also, we are able to produce tubes with porous walls. That makes them extremely light,” co-author Arnim Schuchard a PhD student at Kiel University told the paper.

Although it could be another 30 years before the material finds its way into industrial production, its unique combination of properties mean it has great potential, wrote the paper.

As a lightweight, conductive material Aerographite would ideal for use in Lithium-Ion batteries – in electric cars or bikes for example. Using Aerographite would reduce the amount of electrolyte needed, bringing down the overall weight of the batteries.

Scientists also think the material could be used to make plastics conduct electricity without adding to their weight – and to avoid the build up of static electricity.

Aerographite could be also used in electronic systems on aircrafts and satellites – which must be made from highly durable, lightweight materials.