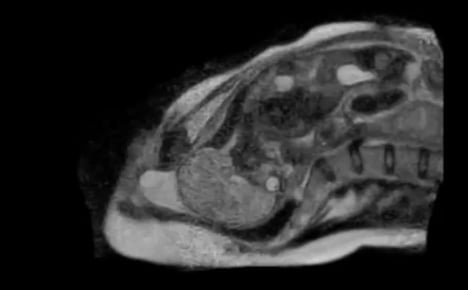 Dr Christian Bamberg, at Berlin’s Charité University Hospital led the project. “It is about understanding the physical mechanism of birth, a dynamic process, with the child performing a complex movement inside what is a very tight space,” he told The Local.

“The baby turns a tight corner in the birth canal and stretches its head and neck as it is born,” he said.

“In the 1950s some researchers took X-rays of births. That of course is obsolete and it would never be carried out today. But that only showed us the bones, none of the musculature, no soft tissues; it did not have any of the dynamism which we see here.

“This is the first time we have a cinematic MRI sequence of the birth of a child. That is something special.”

The 24-year-old woman who had the baby was admitted with regular contractions to the Berlin hospital, said Bamberg’s report in the American Journal of Obstetrics and Gynecology.

In an article entitled “Human birth observed in real-time open magnetic resonance imaging,” Bamberg says the MRI machine, which is very noisy, was switched off before the baby’s head emerged, to try to protect his ears from the sound. The article also states that MRI is considered safe to babies and mothers, and is already widely used in pre-natal examinations.

Bamberg said the aim of the study was to help understand abnormal births. “This was a normal, uncomplicated birth. When we understand the normal process we can better see what is going on when things are not progressing so well.”

And although he said it would be very useful for doctors and midwives, the film was generating enormous interest from many other people.

“It is a fascinating thing to see,” he said.