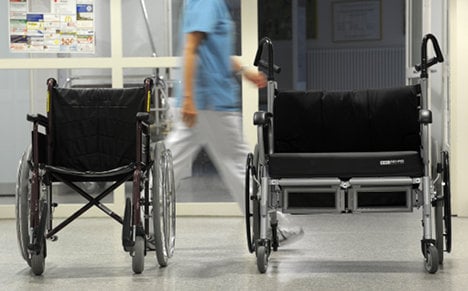 TÜV quality and safety inspectors called on Monday for engineers to think carefully about their designs, as Germany’s expanding waist line is putting all sorts of products which carry people under strain.

The average German is over two kilos heavier than they were ten years ago, the TÜV spokesman said, and this is creating problems and new dangers.

A group of seven can easily surpass a standard lift’s weight limit – 450 kilos – TÜV-Süd spokesman Thomas Oberst said. This could pose problems should the limit be ignored.

“It won’t come to this though, as we will just have to begin building bigger lifts,” said Oberst.

Large office blocks in particular should think about installing stronger lifts in order to keep up with the flow of people moving around the building, he added.

Hospitals are also feeling the pressure to accommodate ever larger patients. Extra-large operating tables, wider beds and stronger hoists to lift patients are already being installed across the country.

It is becoming increasingly common that a patient weighing over 200 kilos will have to be brought in by a lorry, instead of an ambulance said Jens Schriewer, chief intensive care nurse at Erlangen university hospital – where extra-large beds are available for those that need them.

Air travel is another tricky area – one which some aeroplane manufacturers have tackled by installing roomier seats for larger passengers. In many A 320 airbuses, one of the most common types of plane, there are between 60 and 180 aisle seats with an extra five centimetres of wiggle-room.

“People are getting bigger and bigger, especially children,” said Airbus spokeswoman Zuzana Hrnkova who added that some of their planes also had larger toilets.

Architects have begun thinking about the long-term effects on the country’s growing population, which Oliver Heiss of the Bavarian Chamber of Architects said would start permanently changing features like the height of bannisters and width of bath tubs.

Audi engineers said that they were more interested in the fact that humans were getting ever taller. They were, a spokesman said, designing vehicles with more headroom.

BMW was equally diplomatic about gearing up cars for overweight passengers. “People are getting taller, which means that they are also getting heavier,” said spokesman Michael Rebstock.

“The fact is that cars are growing with people,” he added.