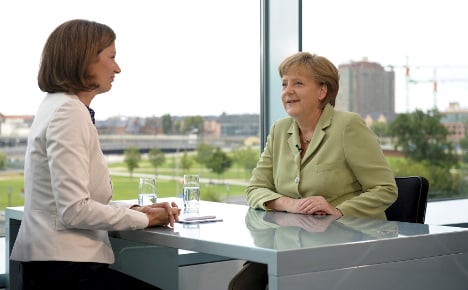 She said the 2013 election will be a vote not only on whether she and her Christian Democratic Union (CDU) should remain at Germany’s helm, but also on Germany’s position in Europe.

In her “summer interview” on state broadcaster ZDF, she said that voters would be asked to decide “where does Europe stand and what ideas do we have about Europe.”

When asked whether she would lead the party in the election and stand for re-election as chancellor she said, “I have already said so, and must therefore not say it again.”

She said the CDU’s election campaign would “show that we want to remain on a course towards prosperity, that we must decisively move forward with our challenges – demographic change and integration of immigrants.”

She admitted there was much work to be done on these matters. “I am very optimistic that we can manage it,” she said.

The topic of Europe was central though. “Without Europe we can no longer champion our values, our ideas, our ideals together,” she said.

When asked about the billions of euros being funnelled into the Greek economy to keep it afloat, even though doubts remained on whether it would fully implement the austerity measures demanded by the EU, she only said, “Commitment to promises is an important value.”

But she avoided the question of whether Greece might be thrown out of the eurozone if it failed to meet conditions. She said she would wait for a report from the troika, the three international bodies currently monitoring the Greek situation – the European Commission, the European Central Bank and the International Monetary Fund.

Merkel reiterated her call for increased powers on the European Union level. Europe must become more binding, she said, and the fiscal pact was a step in this direction.

She added that European institutions should have greater powers to sanction member states that did not keep to the rules.

A crucial European vote is due in the German parliament on Thursday, as MPs are called out of their summer recess to decide on a financial aid package for Spain.

A psychologically important question is whether she can raise the “chancellor majority” in the vote. That is, a majority of more than 50 percent of the total number of MPs. This figure, 311 MPs, is seen as an important measure parliamentary support.

Merkel said on Sunday she did not feel the “chancellor majority” was necessary for the Spain aid vote. “We always get the majority we need,” she said.

Parliamentary votes on the permanent euro rescue fund the ESM at the end of June gave results short of the “chancellor majority.” leading the opposition to claim support for Merkel’s European policies was waning.

“Anything other than a chancellor majority is a defeat and a sign of the erosion of the chancellor’s power,” said Social Democratic Party parliamentary leader Thomas Oppermann. He said Merkel should have the absolute majority of parliament behind her in all central questions.